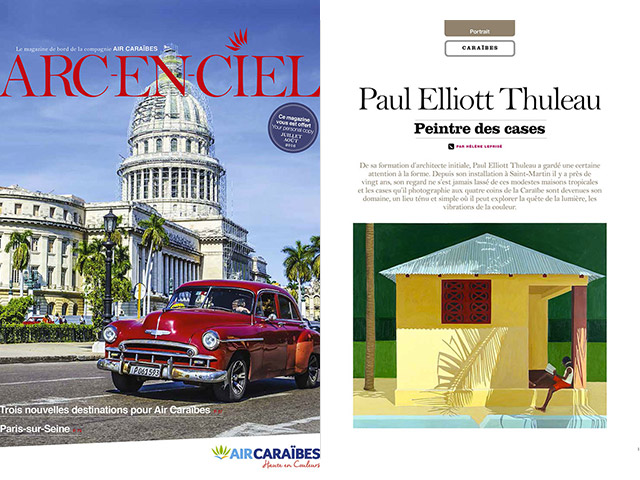 Initially trained as an architect, Paul Eliot Thuleau pays special attention to form. Since moving to St. Martin 20 years ago, he has always appreciated the beauty of modest Caribbean homes. In fact he has traveled throughout the region photographing the vibrant hues of these simple tropical houses.

Paul Eliot, now 55 years old, started his artistic journey in an etching studio in Paris. Then on to Japan where he painted abstract works with a strong Asian influence. He then continued his career in New York where he experienced a greater freedom in his work. At the time, in his early thirties, and having lived in Europe, Asia and North America, he brought the purity of Japan, the large scale of North America and the harmony of Europe to his paintings.

His paintings are full of light which seemingly jump off the canvas. And even though his paintings are quiet, the life of his subjects appears in small touches – laundry blowing in the wind, a person very still, an empty chair, a shadow. Without benefit of perspective, the artist uses geometrical composition to focus the viewers eyes on the music of his colours. The canvas is a world apart but also an escape. The windows open to the sea but at the same time are closed to any intimacy. His canvases also feature some minimal scenes of life – a child crying on a veranda or a woman standing at her door. In other works you have  almost photographic images – the front of a hair salon or a lottery kiosk.

The force of his compositions, without superfluous details, avoids the ordinary and gives his subjects a breath of life but also a distance. It’s as if reality has been emptied of its coarseness and the viewer has been offered a moment of meditation.

Initially trained as an architect, Paul Elliot Thuleau continued his artistic journey in an etching…

The exhibition « caribbean shadows » of artist Paul Elliott Thuleau who lives in our country, just…